In the past 30 years, research on the Earth’s interior has advanced remarkably using two key techniques: the ultra-high pressure generation technique and the geophysical observation technology of the Earth’s interior (seismic tomography, the MT method). In recent years, through the period of subdivision into specialized disciplines, the research on the Earth’s interior is entering a period of integration. In order to achieve the goals of Earth science, originally emerging as a system science, at a high level, it becomes necessary for researchers in various fields to collaborate with each other in a organic manner. Through this process, it has become clear in many research fields that volatile elements that characterize the planet Earth (such as C, H, O, N, S, Cl, and F, along with their compounds) play a key role. Therefore, focusing on the circulation of volatile components as a common topic should enable various Earth science disciplines to effectively connect with each other and extend seamlessly to planetary science.
The Department of Earth Science and the Department of Geophysics of the Graduate School of Science, Tohoku University have been designated as one of “the 21st Century COE Program”, “the Global COE Program”, and “the Center for Excellence Program”. The Graduate School of Science have been selected for one of “the Good Practice Projects” for two consecutive terms. We conduct cutting-edge research projects in many fields. Our research framework is all-embracing, viewing the circulation of volatile components on a global spatial scale and on a temporal scale of the Earth’s history from the perspectives of co-evolution between the Earth’s interior and the environment and life on the Earth’s surface. One achievement of these efforts is providing many doctoral graduates for research and education institutions, government offices, and industries in Japan and abroad.
Meanwhile, the Bayerisches Geoinstitut, University of Bayreuth (BGI) is one of the world’s leading research and education institutions for the study of the Earth’s deep interior. The Institute conducts in-depth research focusing on the materials in the Earth and other planets using a variety of research techniques. The Bayerisches Geoinstitut pursues mineral physics, experimental Earth science, and other sciences at an extremely high research level. The Institute has many technical and theoretical strengths not found among Japanese research institutions.
In this program, the Department of Earth Science and the Department of Geophysics of Tohoku University, which pursue a wide range of research subjects as described above, and the Bayerisches Geoinstitut, University of Bayreuth (BGI), which conducts in-depth research using various research techniques, built a framework for joint research and education. To do so, we aim to provide and conduct graduate school education and research on the Earth from a comprehensive perspective focusing on the circulation of volatile components. This program has been set up as the core of “the Graduate Program in Earth and Environmental Sciences”, which is the cornerstone in “the Top Global University Project” of Tohoku University. 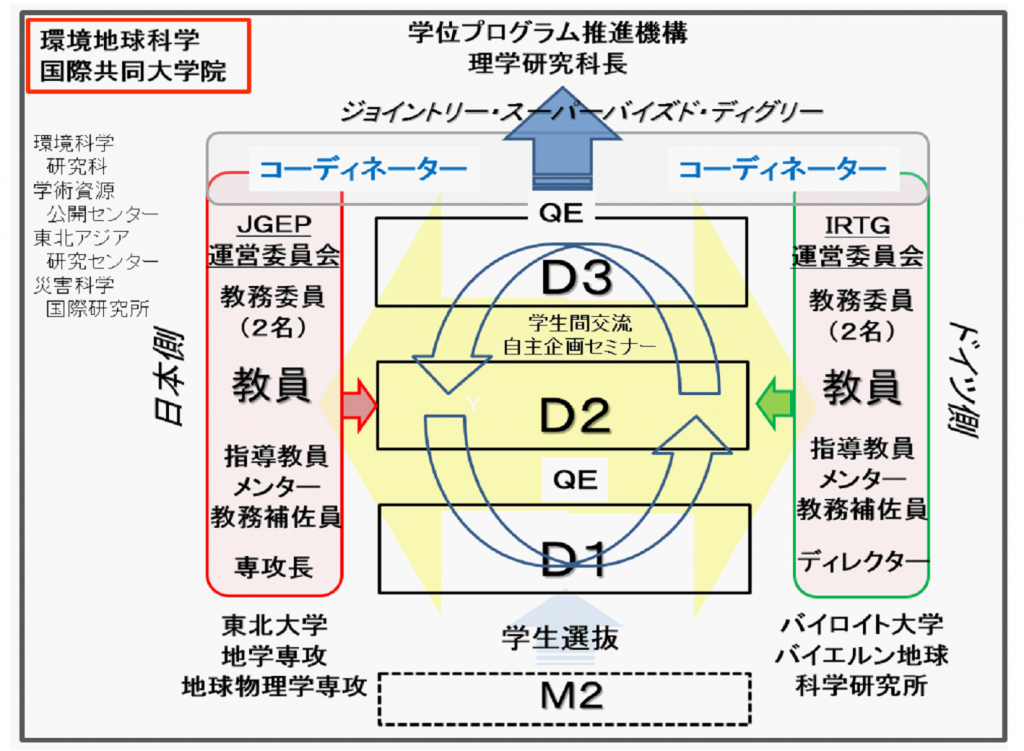 The University of Bayreuth is a university in Germany founded in 1975. The university, headquartered in Bayreuth, Bavaria, Germany, has six faculties and many attached research institutes.
The Bayerisches Geoinstitut was established in 1986 with the aim of clarifying the structures, formation, and evolution of the Earth and other planets, determining the properties of the materials that make up the Earth and other planets through laboratory experiments and the use of computers . This world-renowned research and education institute has been conducting world-leading research, and is rated on a par with the Geophysical Laboratory of the Carnegie Institution for Science. The institute has state-of-the-art techniques and equipment, including high-resolution electron microscopy (HREM), various spectroscopic analysis such as Moessbauer, laser ablation inductively coupled plasma mass spectrometry, and various crystal structure analysis apparatuses. Many of the brightest researchers capable of making full use of these systems work at the Bayerisches Geoinstitut. Incidentally, the staff and students at the Institute are highly multinational, with more than 10 nationalities.